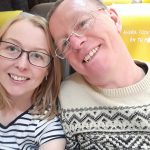 A last minute decision to get away for a few days late February landed us in the magnificent city of Barcelona. We booked our little package through Superbreaks on the Wednesday and flew the following Saturday. It was very exciting. We left at 04.30am and drove for less than 2 hours from Nottingham to Luton and landed half an hour earlier than the scheduled 2 hour flight, about 11.30am. It was a doddle. A travel ticket purchased at the airport for 35 euros a piece has made getting around very easy, it covers the main bus routes and the metro, both run frequently from the airport and we hopped on the number 46 bus so that we could see the sights on the way into the city centre.

DAY 1 : Lovely mooch around Barcelona Arena and the area to check 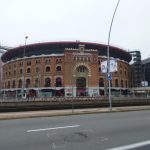 out the Monument for the evening fountains and light show but unfortunately it doesn’t run at this time of year. We consoled ourselves with some tapas and beer before heading off to find our hotel, just minutes away from the Sagrada Familiar and a number 50 bus ride. 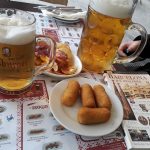 Wow, what a beautiful city. Once refreshed we headed out to explore the local eateries, of which there were many. We had a lovely meal and called time on an early night, it had been a very long day.

DAY 2: Purchased City Bus Tour tickets for today, 27 euros pp (3 euros cheaper pp online) so up early and down to breakfast by 8.00am. 2 routes to get through today, orange and green. Hopped on at 9.30am and last stop reached at 6.30pm. You can hop on and off all day and explore. It was very chilly up top this morning, very glad of coat, thermals, hat & gloves. Overheated in the afternoon once the sun shone. C’est la vie! We saw many of Gaudi’s buildings on the tour as 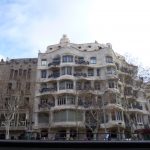 well as the football stadiums. For lunch we found an amazing patisserie called Mauri and had the menu of the day for 16 euros (3 courses + bread & wine). Delicious. Tapas for tea in a lovely authentic restaurant close to the hotel called Los Belloto.

DAY 3: We got up early and went for a run. The intention was to run down to the beach but we ended up doing a grid around the Sagrada Familiar. I love running in new places. We bought tickets online for Parc de la Gaudi for 2.30pm (7.50 euros pp) so we needed to amuse ourselves in the morning. A lot of places close on Mondays so we headed to Barconaletta near the sea for a mooch round and to check out the seafood restaurants for tonight, we have decided it’s gonna be Paella night. We then took the metro up to Lesseps and enjoyed the 25 minute stroll to Parc Guell, stopping for coffee and a bite to eat on the way. 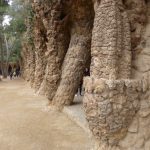 All of the gardens and walks around the park are free but it’s worth paying to see the Monumental Zone and it also funds the restoration work that still goes on. 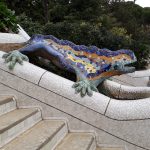 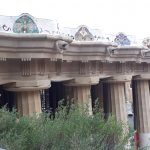 Back to the hotel before heading back to Barcolenetta. We had earmarked a place with the menu of the day for 16 euros pp which included seafood paella but we were intercepted on the way by a charming owner of another seafood restaurant who challenged us that if we didn’t like his paella we wouldn’t have to pay. We shared a seafood and vegetable paella washed down with a jug of Sangria and of course, it was scrummy. 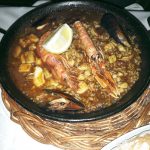 DAY 4: Time to visit the infamous Las Ramblas and the Gothic quarter. We enjoyed our stroll down Las Ramblas, it was indeed very quiet at the start, about 10.00am. But by lunchtime the area had really busied up. I’m not sure I’d like it in the full throws of summer when it’s heaving and the pick pockets are out and about. The indoor food market was sensational to wander around. A light lunch of “Frites & Beer” and onto the gothic quarter, so named because it used to be the Roman Village. There are plenty of windy streets and also peaceful squares plaças) where you can relax and enjoy your surroundings. Not so peaceful when the parrots are in full song!! This area is also great for shopping. We regret not going in the Cathedral, 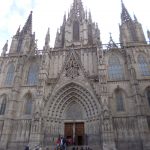 just a bit tired from all the walking, maybe next time. We ate this evening at Jamon Y Vino, I had the local dish of Catalan sausage and beans. Bit bland if I’m honest but filled a gap.

DAY 5: Our last day ☹ but the plane doesn’t leave until 6.10pm so we have the whole day, yipeee. Check out wasn’t until 12 noon (how civilised) so we had our last breakfast and went to the Sagrada Familiar and did the audio tour and went up one of the towers. We had walked around the outside so many times in the last few days, it was 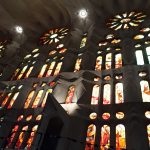 also very beautiful inside. There are still extensive works to get it finished, it’s set to be complete by 2026, the anniversary of Gaudi’s death. Back to the hotel to finish packing and then off to Mauri’s again for lunch, why not!! A final mooch around before taking the train back to the airport. The flight was delayed slightly and we arrived back an hour later than expected but we were still home by 10.15pm.

We were tired but came away with so many super memories. I overestimated the number of steps walked and when I totted it up on Fitbit it was only 102309 but still not bad for 5 days me thinks.

If you haven’t been I’d highly recommend it.